One of the few things many of us have been able to maintain even in stay-at-home orders has been getting out for a walk around the neighborhood. Maybe we didn’t even do it all that much before a worldwide pandemic, but now we’ll take whatever change of scenery we can get and take turn around the block.

For us, sometimes my boys don’t realize their own stir-craziness. They may be wild and driving each other bonkers, but still not up for joining me on a walk. I know getting out in the fresh air and doing something physical will provide us with a nice reset, but they’re often less than willing participants. So I’d like to share a few sneaky tricks that have worked for us. 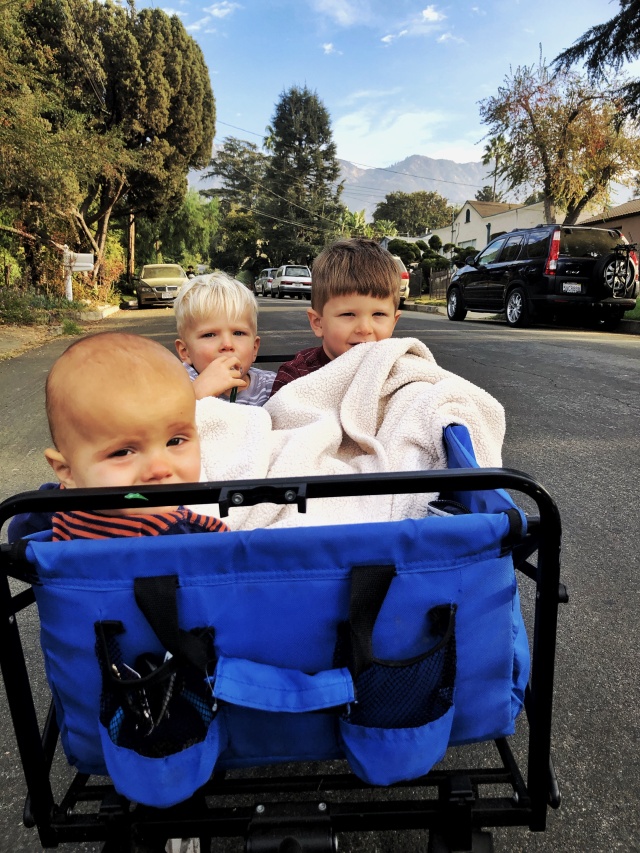 Draw a neighborhood map, from memory, beforehand at home. Then as you’re out an about, check it for accuracy and bring along a pencil to make changes. You’ll be amazed at what you missed, but make it a game to see how right you were! We drew the streets between our house and a familiar location, then walked there. We got the main crossroads, but of course missed some of the less familiar streets. It kept us moving toward the “goal” of the next street sign to see if it was one we had on the map or not.

A variation of the map idea: we once made pirate treasure maps with the dotted line showing the pirates’ journey past various islands and sea creatures till they made their way to the giant X marks the spot. We took the maps with us on our walk, and I was surprised how easy it was to “play” pirates along the way with the map as the guide. The island they colored purple was represented by some purple flowers growing on the side of a hill in someone’s landscaping. The school of fish became a bunch of fallen leaves, one inevitably scooped up as proof we’d made it that far.

Once we did a scavenger hunt. I made a list for each of the older boys, things like a green car, a barking dog, a bug, a blue door. I loaded them up in the wagon with a marker to check off the things we found. It gave structure to our walk and ended up being a good reading exercise for the emerging reader.

Be prepared to stop and embrace exploration. I like to walk for exercise. Unfortunately, that doesn’t work with young children. Their pace is more of a stroll, and they’re easily  distracted. It helps me to remind myself to encourage their sense of adventure instead of hurrying them along. Once we discovered a fast-moving stream of water flowing down the curb on a street near our house. We spent almost an hour in that one spot as they threw in various leaves and twigs and watched them race down toward toward the storm sewer. They could’ve played there all day! A few streets over some neighbors have a pet tortoise who lives in their front yard, so we’ll often linger there a bit to watch him.

The game “I Spy” is always a classic, but I’m not always in the mood to play. Sometimes it’s easier to grab a snack like a bag of pretzels (and their water bottles–don’t be caught blocks from home without water for parched babies!) to keep them quiet for awhile!

The best though, is just letting conversation happen, seeing where it takes you. You’ll learn their dreams, fears, crazy ideas, as your feet wander along. Grab their sweet little hands and bring along a question or two to get things started. Here’s a list categorized by age if you need some ideas. Or my favorite is to start with “Remember when…” and insert some fun family memory. Remember when we went to that hotel with a water slide, and you and your cousins went down it over and over again? Remember when we camped in the back yard, and you were so brave and slept out there all night in the tent? Remember when we had breakfast for dinner and you helped make the cinnamon rolls? Remember when Ollie put that bucket on his head and crawled around laughing? They’ll join right in!

What’s that saying, don’t forget to stop and smell the roses? A slower pace and springtime are a perfect combination for embracing a family stroll!