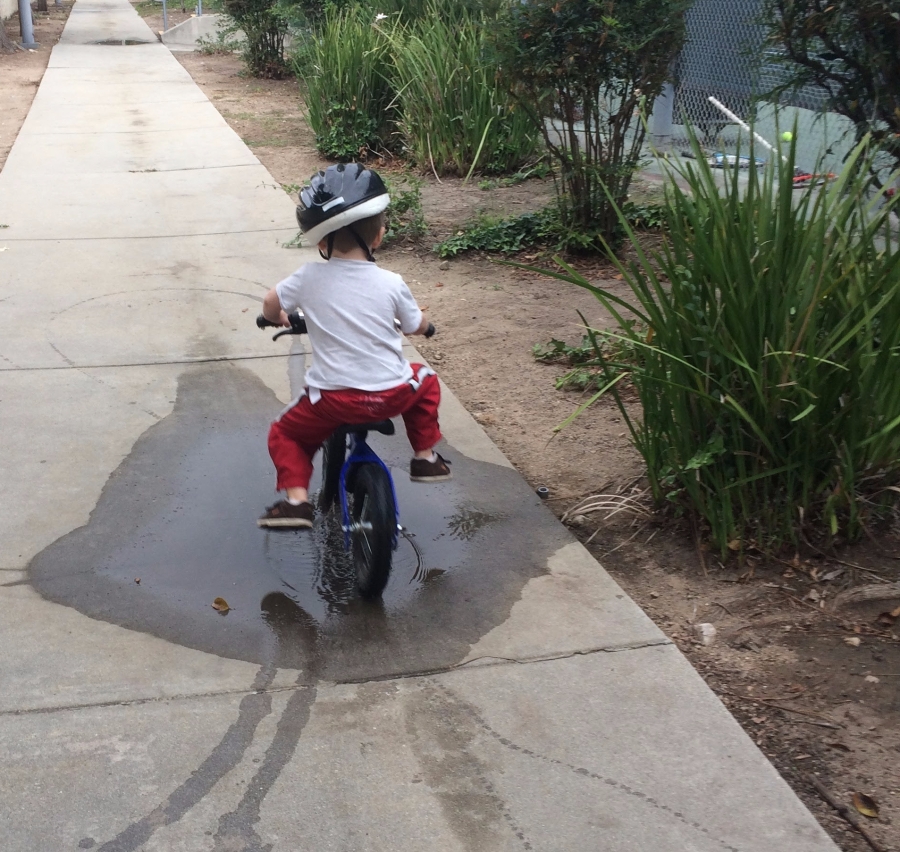 Kids are natural scientists. They may not be very methodical, but they make up for it with sheer curiosity and lack of inhibition. Add to that their limited understanding of cause and effect and extremely basic think-before-you-act reasoning, and you might start to see why we parents are so quick to shut down their experiments. We’re not trying to squelch their natural inclination to explore and investigate. Our main goal is to make sure they live to adulthood!

I remember playing with my brothers in the backyard on a hot summer day. It may not have been an “experiment” in the scientific sense of the word, but I remember it seemed like a good idea to get the garden hose involved in our activities. As soon as we opened the valve, Mom opened the back door, “Not the hose, kids!!” We hadn’t even had a chance to get wet yet! It was like she had a 6th sense! It wasn’t until several years later I happened to be inside when my brothers turned on the hose outside. There was a strange humming sound from the pipes in the wall. My eyes met my mom’s, mine wide with the new realization: so that’s how she always knew when we turned the water on!

Obviously, I don’t think we were about to accomplish some great scientific discovery utilizing (sparingly, due to our innate sense of conservation, of course) the garden hose. More likely we wanted to cool down and probably wreak havoc on the backyard and our little brother. But the point I want to make is how I often, as a mom, with my 6th sense, can see the mess/disaster before it happens, but that doesn’t mean I shouldn’t let my boys try their idea and learn for themselves. (Always with safety in mind, naturally!)

Take for example, the other day. Eddie was playing outside, happily occupied, and I was happy to be uninterrupted inside, getting things done. I was in for a surprise!

I rounded the corner to check on him, and he greeted me with a huge grin.

“What are you doing?” I asked, genuinely curious what he was so pleased about.

“Look, Mom!” Pure thrill all over his face.

I had a choice.

In a weaker moment, I would have scolded him for the mess, made him help me clean it up as punishment.

Instead I chose to laugh. I smiled back at his innocent delight. He was so pleased with himself, he drew me into his happy experiment. I asked him to walk me through the steps again, which he did with pleasure, complete with demonstration. (“Then I fling it at the wall!!”)

Sometimes we need to zoom out a little. Now, kids are super zoomed in: their brains literally unable to take a step back and think about consequences or cause and effect. And yes, our job as parents is to help form those little thinkers into, well, thinkers. But I know I can get too hasty. I’m zoomed out enough to see the immediate problems of this or that “experiment”, but the bigger picture is one of a childhood free to explore and learn through experience. Blazing a trail, trying some new idea, exploring and creating along with an explanation from dad and mom sprinkled in here and there and good dose of time (let’s face it, the brain physically has to develop some thinking skills), that’s how rocket scientists are made!

Sometimes I need to bite my tongue and forget about wet shoes and muddy pants I’ll have to wash later. I need to let my little guy wonder at the fun tracks wet bike tires and how if he rides in the dirt first the puddle will clean the mud off his wheels. These simple things are building blocks for bigger concepts, not to mention the stuff of a magical childhood.