I love to tag along when my husband, Jonathan, the rocket scientist, gives a tour of JPL, where he works. Yes, there are the super cool models of spacecraft through the years: Explorer 1, Cassini , and rovers like Spirit and Opportunity, and Curiosity, the surreal places like the Deep Space Network mission control room and the Spacecraft Assembly Facility, but my favorite is seeing Jonathan all excited and passionate. He still makes my heart skip a beat with all the giddy feels.

Jet Propulsion Laboratory, one of 10 NASA field centers, designs, constructs, and operates robotic spacecraft. Basically, super awesome stuff. Eddie has, of course, been several times in his short life, but it gets better every time, as he understands more.

Eddie’s interest in space is sky-rocketing these days partially due to his friend, Jet Propulsion, the star of a PBS cartoon all about space. Now he’ll casually spout off some random space fact.

“Mom, did you know when we’re stuck in traffic, the mars rover goes even slower than that!” (Thankfully he mentioned this little tidbit when we weren’t stuck in traffic since I’m not sure it would help assuage the frustration.)

“Pluto is NOT a planet anymore.”

“The planets orbit all around the sun.” (complete with whirling arm gestures)

“Did you know the moon has holes called craters made by ast-e-roids?”

“My favorite planet in our solar system is Saturn-with-the-rings.”

We shamelessly encourage this by having him repeat all this to various family members, an entire collection of space-themed pajamas, and checking out all kinds of space-related books from the library.

He’ll probably move on from this fascination, sadly, back to trains or construction trucks or who knows what else. 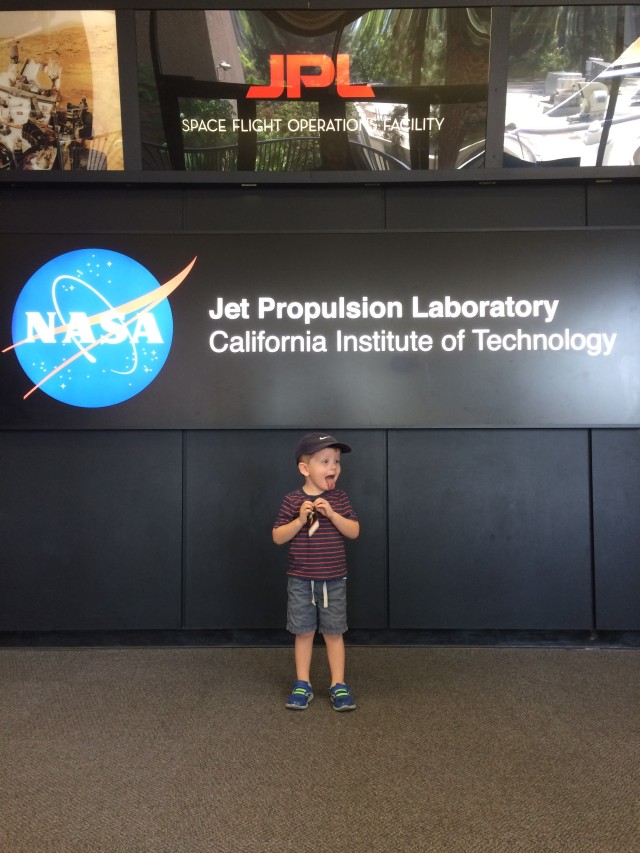 Until then, anyone want a tour? We can hook you up!