Our resident rocket scientist (a.k.a. Jonathan, a.k.a. Dad) was recently motivated by a fun conversation with our 4-year-old (a.k.a. Eddie) to order some strong magnets from some online source (cheapmagnets.com or something). I’m pretty sure the idea was to demonstrate how a simple electromagnetic motor works or something like that.

When they arrived, Jonathan was at work and Eddie was too excited to wait, so I figured a basic magnet lesson was in order anyway. He had a blast messing around with the magnets, checking out their forces of attracting and repelling as he turned them this way and that, building towers, stacking and separating. 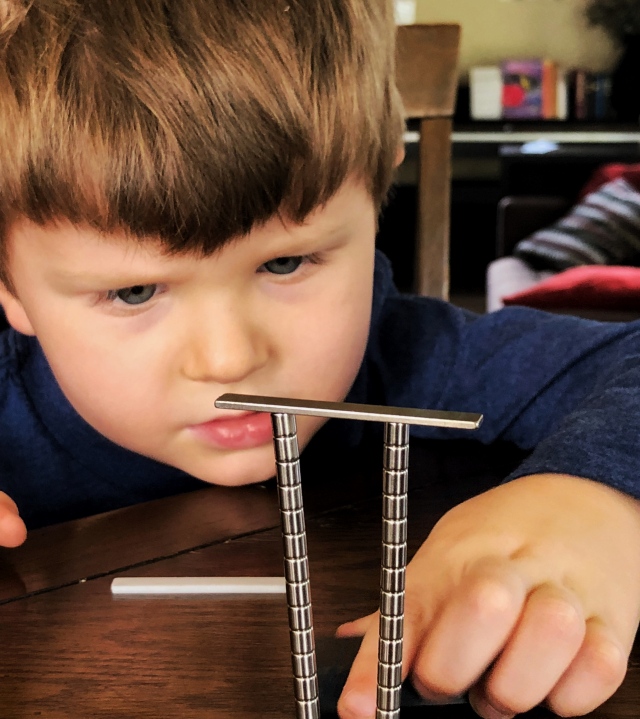 I had the bright idea to turn it into a formal lesson. I drew rectangles on a piece of paper labeled the poles, N for north and S for south. Then I put little strips of masking tape on the ends of the magnets with the same letters. Eddie lined up the magnets on the paper while I coached him to notice if they were attracted to each other or repelled by each other.

Until…the same poles sometimes snapped together instead of pushing away from each other. If you turned them around or over they might behave as I had assumed they would, but it was basically random. I was stumped! And, as you can imagine, I lost Eddie pretty quickly.

So, you know what I did? Did I google how to “correctly” teach about magnetic properties? Did I stick with it till I figured out where I went wrong? Did I call up the rocket scientist? Nope. I shrugged, and turned him back to free play with the magnets. He enjoyed that much more anyway.

I’m here to say, let’s not sweat it. Let’s chill. Play it cool. If we waited till we had it all right, all figured out, lesson planned down to the details…there are things we’d never get around to introducing to our kids. I think Eddie learned more through his free explorations of the magnets. Sure, he might not have been able to articulate the why behind magnetic force, but there’s time for that. No rush. Rome wasn’t built in a day, my friends.

Later when Jonathan came home, I asked what was going on? Why didn’t my explanation hold true? Turns out, it’s so simple. The little magnet bricks were magnetized lengthwise, not on their short ends like I assumed. All good. We’ll save the scientific explanation for another day.