Are you the type of family that will wake even the smallest children during the night after working hard to get them to sleep through the night just so they will undoubtedly respond rather apathetically to whatever once-in-a-life-time experience happening at such an hour? We are that family!

Xanderman had a rather tough time sleeping for a few weeks there, waking up and fussing off and on for several hours. Finally, he’s worked through it and is back to sleeping all night. Such a victory! In light of that, it was pretty crazy to think of yanking him from his peaceful sleep at 3:00 am Saturday morning to *hopefully* witness the first interplanetary launch from the west coast.

You see, we took a little family trip to a cheap hotel a few hours away, just to be close enough to see NASA launch Insight, its latest mission to Mars, from Vandenburg Air Force Base. (Remember this? Our names are on the spacecraft!) I love a sweet little family getaway to escape routine and make those precious memories. We took off Friday afternoon because the rocket was scheduled to blast off with its unmanned science payload “as early as 4:05 am PDT on May 5, 2018”. In reality, the given time was the opening of a launch window lasting several early-morning hours every day for the next month. But we could hope it wouldn’t be scrubbed at the last minute.

We added to the hours-long drive a little detour to check out what Jonathan had spotted as possibly a great place to view the launch. It was a windy mountain road with overlooks affording great views of the town of Lompoc and the base itself. It was an impressive sight in the late afternoon sun, but the marine layer was already creeping in from the coast. Another launch enthusiast who was already camped out at the spot assured us the fog wouldn’t get so high as to shroud the view completely.

Things were looking all go-for-launch as we went to bed in our hotel room that night, the boys finally settled after all the expected craziness of having been cooped up in their car seats all afternoon.

Six hours later we yanked them from their peaceful slumber and loaded them back into the car. A short drive later we pulled off onto the mountain road our headlights cutting through dense fog. We were hopeful it would give way as we wound our way up, but alas, it was still heavy even at the top. It was also already crowded! We opted to head for one of the official sites from which to view the launch, Lompoc Airport, which was also teeming with people. We parked at a nearby Walmart, loaded the boys from car seats to stroller and made the short walk to the tarmac. It was packed. People crowded the bleachers, set up their own lawn chairs, meandered through the Insight roadshow tent of posters and information, waited in line at the food truck, and stood around under the floodlights murmuring in anticipation. 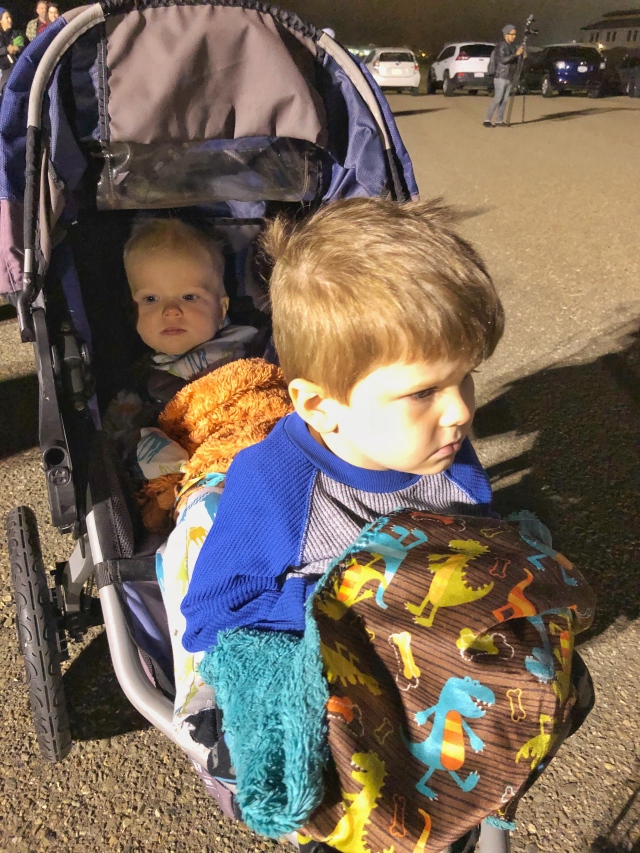 We had expected streamed commentary as the launch approached, but ended up too far from the speakers to hear very well, so we pulled up the live stream video feed on a phone and huddled around it as the clock counted down. Jonathan had run into a coworker, no surprise there, so he and his fiancee joined our huddle. The floodlights went out as we entered the final seconds to ignition and lift off.

Then, the sudden loud rumble, rising in crescendo, shaking the ground under our feet. We scanned the sky for the glow, but the marine layer was too thick. It was almost eerie to see nothing of what was causing the roar but just to hear it shaking the early morning, to know this huge controlled explosion was rocketing into the air just beyond the clouds.

Seconds passed and the sound began to fade as the rocket (presumably) rose into the sky. The commentary kept running reporting all the nominal checks. People began packing up and heading back to their cars, back to their beds. We had to chuckle at the rather anticlimactic end to all the anticipation. We kept the live stream going as we walked back to the car and sat in a middle-of-the-night traffic jam back to the hotel. We were especially interested in the interviews and updates about MarCO since Jonathan did some work on the antenna for the small satellite a few years ago, one of the early projects he was assigned. He’s done a lot with small sats, as they’re affectionately called, and MarCO is the first to travel outside Earth’s orbit.

All in all, as far as upsetting the delicate schedules of our little rocket babies, we couldn’t have had it better. The drive was actually pretty short, even with the traffic on the way back, and the launch happened right away. We only had to wait a few minutes out on the cold, foggy tarmac and were back to our beds just 2 hours after we’d left them. And in the dark of the shades-closed hotel room with the white noise blaring, the kiddos actually slept in the next morning. A toddler-life miracle! 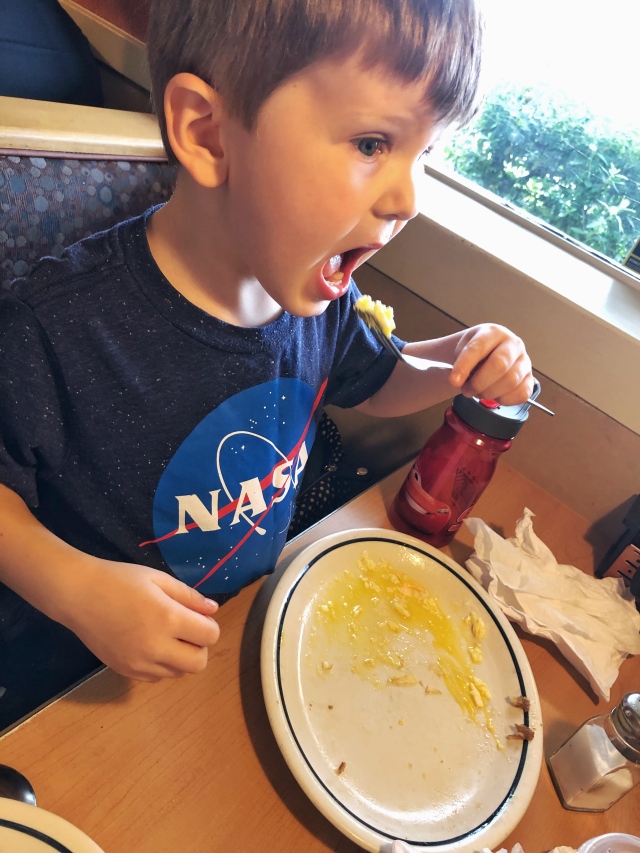 We rounded out the trip with a late IHOP pancake breakfast which the boys devoured, a little park visit and short local hike before it was back to the car for the trip home. Admittedly, the boys were cranky messes by nap time, but nothing the soothing motion of a moving vehicle couldn’t fix.

Was it worth it? All the hassle for something we couldn’t even see in the end? Yes. Always. C’mon, if we’re trying to launch some rocket babies, those rocket babies have to see some real launches! Right?