If you’re like me and tend toward conflict avoidance, you know, people’s distress causes you serious stress, then can we just acknowledge for a minute how this makes parenting hard sometimes? Sure, I get it. I have to teach my kid good behavior. This includes, from time to time, reprimanding bad behavior or sticking to my guns when I require something, for their own good. I’m thinking long term, big picture (kids aren’t so good at that!). 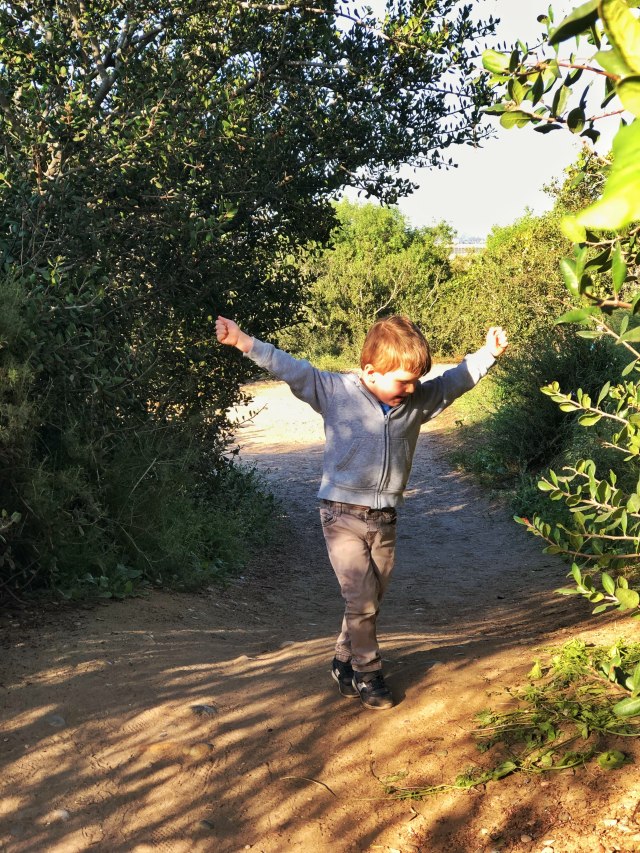 Today was a good example. With a few upcoming trips to new cities where we plan to do a fair amount o f exploring and some of it will have to be on foot, our 4-and-a-half-year-old (as he insists) needs to be able to walk some. Sure we’ll have a stroller, but there are two kids, and the younger is pretty hefty to have in a carrier all the time. Walking home from school this afternoon, I proposed he walk some of the way, not hitch a ride on the stroller as he prefers. We talked about how, yes, legs get tired, but if we practice walking a little bit every day his legs will get stronger and then they won’t hurt so much when he walks longer distances. After this conversation, I had him hop off just around the corner from home to walk. Guys, it was maybe a quarter of a block. And that’s stretching it. He is perfectly capable of walking this far. Baby steps, I thought, start easy.

You’d have thought I was torturing him.

He cried and screamed like I was making him walk over hot coals or a bed of nails. I stayed positive. I encouraged. The guy walking his dog assured him that if his little dog could do it, he could too! Still he screamed. All. The. Way. Home. Where he threw himself on the grass hollering about how his legs hurt.

In my attempt to stay engaged, show I cared about the terrible pain he was in, I took off his shoes for him while he sprawled across the couch wailing. There was a little pebble inside one of them.

“Oh!” I said, “there’s a rock in here! No wonder it hurt so much to walk!” And I walked over to the door and tossed the rock outside. Literally as I flung the rock out into the grass, Eddie’s wailing intensified.

“That was the special thing a brought home from school to show you!”

Now I felt really bad. I tried to look for the little pebble, but it was nowhere to be found. The intense mourning for the beloved pebble continued for some time. It was just one of those time when I’m at a total loss. All the extreme distress that I supposedly single-handedly caused is enough to make my conflict-avoidant discomfort reach peak levels!

It happens all the time too with the other one too, and his newfound penchant for throwing a tantrum when he has to stop doing something he likes. Sometimes just the thought of inducing one of these passionate blowups gives me pause. Don’t get me wrong, I know, I’m the mom. I’m in charge. And really, his tantrums are those almost funny, totally distractable kind. Like, here, have a snack, and suddenly not getting to read the book for the 46th time doesn’t seem so terribly awful. I still do what I have to do. Mostly. But my personality often needs a little push, a little pep talk to get through some of these altercations with my kids. Isn’t that funny?

What aspect your personality bumps into your parenting values on a regular basis? I’m curious!

2 thoughts on “Parenting and Personality”