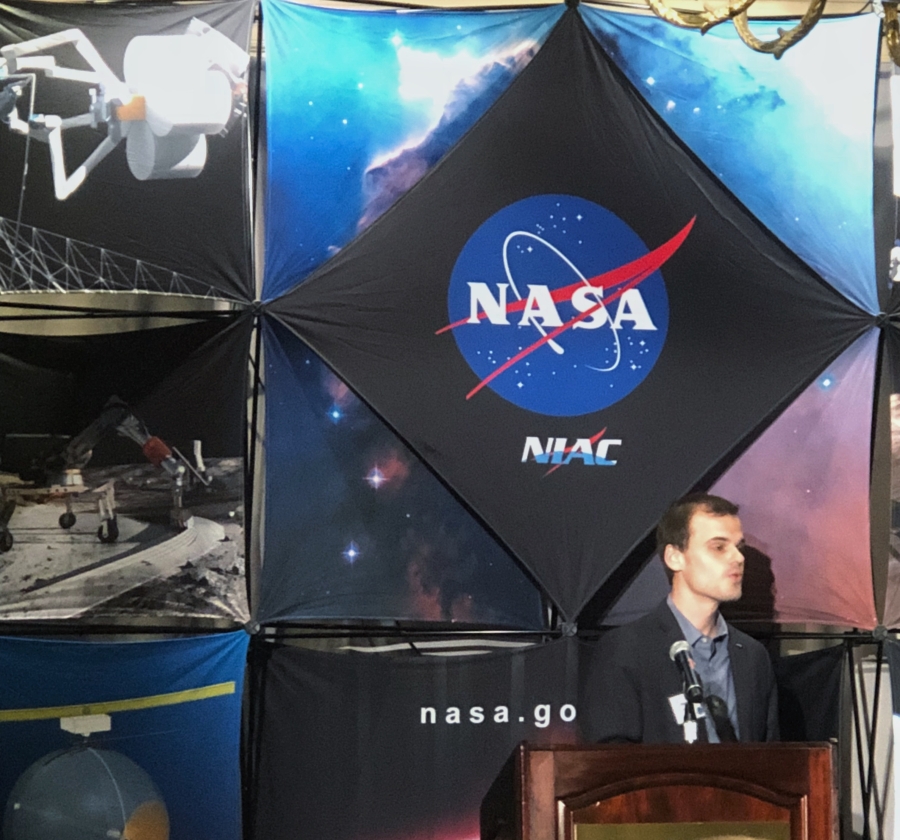 Last week the whole family got to tag along with our rocket scientist to the NASA Innovative Advanced Concepts (NIAC) Symposium in Boston, Massachusetts. Jonathan was presenting an update on the mechanical rover for extreme environments, like Venus, where traditional electronics can’t take the heat, literally.

When he first won funding from NASA for this “crazy idea” two years ago, we tuned in via live web stream to watch, and again last year as he moved into phase two. For the finale, it was so special to get to be there in person. 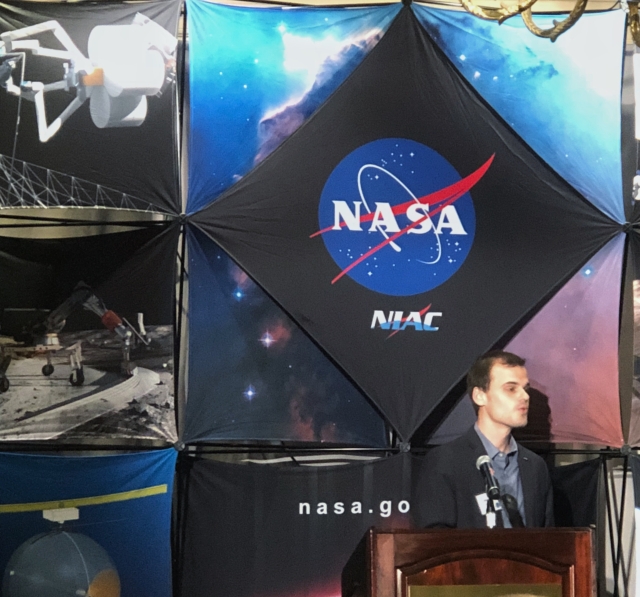 The Symposium is high-class, a room full of professionals who have been awarded NIAC funding for their visionary ideas. While anyone can attend (or watch online), taking two littles was fairly daunting. Add to it, we’d have to navigate our way from our hotel just outside downtown into the city of Boston, by train, in the pouring rain. But LA to Boston is already a long way to travel to see Dad in action, so, huddled under umbrellas, I braved the weather with 4 and almost 2-year-old and made our way to the fancy hotel downtown.

We arrived, a little wet and sleepy. I’d had to wake Xander for the adventure, and Eddie managed to fall asleep on the short train ride, lulled by the rocking I suppose. I’d timed it so we arrived during a break and we were able to meet Jonathan in the hall outside. There would be one presentation then his own, so we could easily (I hoped!) last that long in the back of the room. We met a few of Jonathan’s colleagues, picked up some cool swag from the registration table (stickers, pins, etc.) and then it was time to take our seats.

Of any technical concept presentation, I’ll take a NIAC any day. They have to keep it short to fit all of them into the 3-day Symposium, just 15 minutes followed by 10 minutes of question/answer, and the ideas are so out there, so interesting, even when they get a little too technical for me to follow all the details. The guy presenting before Jonathan gave a hurried talk about breakthroughs in asteroid mining technologies. Did you know there is enough raw material in the asteroid belt to fully power the future of space travel and colonization in our solar system? He had a cool animation of the spacecraft being designed to “bag” a small asteroid. Eddie commented that it looked like a Star Wars ship. He wasn’t wrong. 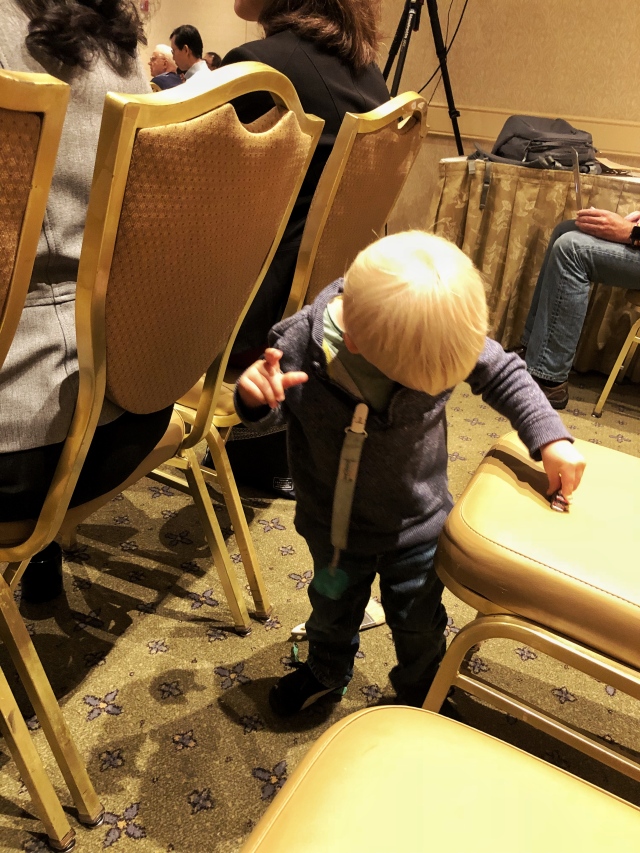 Meanwhile the small bag of toys I’d packed along with some snacks were saving the day in the back of the hotel ballroom. While Eddie was engaged enough and quiet for the most part, Xanderman doesn’t really know the meaning of keeping quiet. The most surefire way to keep his mouth shut is to keep shoving food in there.

Soon enough it was Jonathan’s turn. I think I get more nervous than he does. While I see some nerves and stress while he does the hard work of preparing ahead of time, in the moment he’s cool as a cucumber. His presentation was well-delivered, and he handled people’s questions and suggestions with poise and professionalism. He’s so cool. Basically, I’m super proud of him!

Sure, during the short video clip of the prototype rover navigating around a rock, Xander couldn’t help but exclaim, “Crash!”, since vehicles crashing are his favorite playtime activity. Sure, there were a few comments about the boys’ little noises from a few folks afterward, but the most common reaction was delight that these next generation “rocket babies” got to come hear about the real-deal, super-cool crazy ideas under development for the future of space exploration. 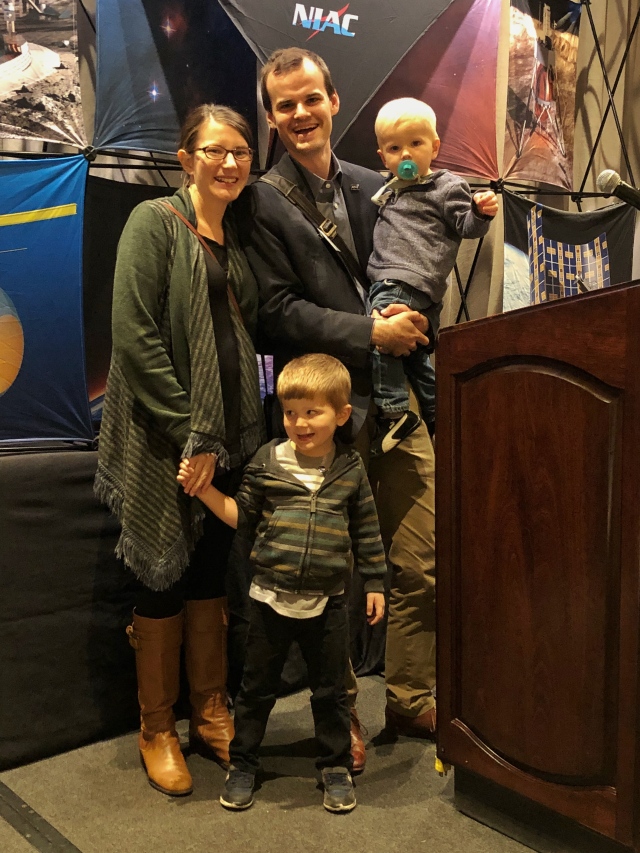 If you’re interested, World Book partnered with the NIAC program to develop a series of books about many of these visionary new concepts. They’re designed for middle school age kids, so a little much for our rocket babies right now, but maybe just right for yours!

We ducked out after Jonathan’s presentation and did a little exploring around the historic hotel. When he was done a short time later, he showed the boys his fully mechanical clock, made of materials which don’t melt at high temperatures. 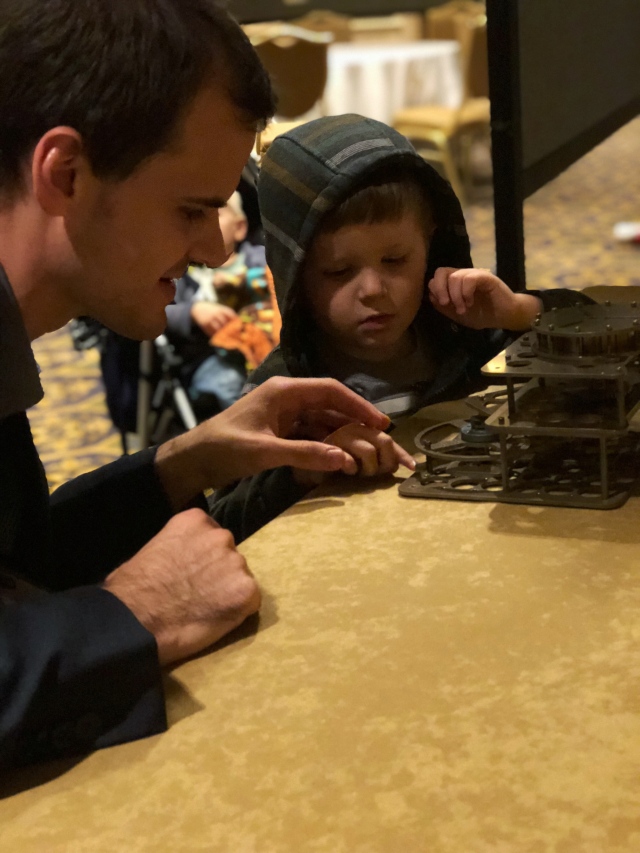 Sons are naturally fascinated with their Dad’s professions, I think. And whether or not they follow in his footsteps, there’s something that warms my heart about the depth of connection fostered as they wonder, discover, and explore together!

When life gives you lemons...or a friend gives you a whole bunch of her over abundance of 🍋 you do an experiment! . In the after school doldrums, I suggested we have a little science fun mixing lemon juice and baking soda. We used medicine syringes to make it more fun and add a little fine motor skill practice. . I cut the lemons, but let them juice them, pour baking soda into their bowls, and squirt the juice on the powder with their syringes. . As I googled what was going on to make a science lesson out of the fizzy fun, up popped an article for a similar experiment adding dish soap, so we had to give that a try too. Turns out the sodium bicarbonate of the baking soda mixes with the citric acid of the lemons creating carbon dioxide gas which gets trapped in the dish soap bubbles. . Turns the grumps into goofy mad scientists 👨‍🔬 . #scienceplay #scienceexperimentsforkids #sciencekids #simplescience #kidsandchemistry #whenlifegivesyoulemons #bakingsoda
Our sweet #ollierocket came blasting into our lives 1 year ago!! How?! 😩 He’s really into celebrating: sang along to his own happy birthday song, got all the fun rocket toys, and an amazing rocket cake complete with sparkler candle! 🚀
Library love is strong with this one. . . Last week while our resident rocket scientist was away on business travel, I tried to make bedtime routine vary a little, so one evening we went to “pajama storytime” at our library! BIG hit! I’ll say it again, libraries are awesome! A go-to resource! Show your library some love, and trust me, you’ll find they return the favor! 📚 . . #librarylove #raiseareader #booksbooksbooks #babylovesbooks #crawlingbaby #nooksandcrannies #pajamastorytime #exploreyourlibrary #bedtimeroutine
When it’s been so long I’ve almost forgotten why I bother to squeeze in the time to write about our little lovely life, then a fresh start comes along and I remember. Hereit is, in all its mundane glory: simple routine. But as it morphs and changes subtlety over time, it’s good to have record of something that was so normal for awhile sometimes we forget to notice. Noticing the everyday moments is why I’m here, taking time to write things down. The little things matter. It’s what makes up a life! . . . Read the full post on #launchingrocketbabies 🚀 Link in profile. #routine #lovelylittlelife #stopandsmelltheroses #befullypresent #noticetthelittlethings #worthremembering #momentslikethese #dailylife #whatmakesupalife
Ollie is adding to Xander’s knee-hole art these days. #fashun #crawler #babystages #handmedowns
We had to check out #mars2020 one more time before it leaves #jpl and begins the journey to Mars. #bonvoyage #ollierocket #sometimesitdoestakearocketscientist #space #roboticspaceexploration #daremightythings