Since it was just Easter, last weekend around this time I was sorting through the few things I’d gotten for our big boys getting ready to hide their Easter baskets Sunday morning. Jonathan was amused since I was insisting they must have Easter baskets, a tradition he didn’t grow up with, so he wondered why I forced it into our already busy day of celebrations. Family of origin differences aside, as I consider the past week, a few things stick out.

After a busy weekend of several festivities (involving lots of food preparation) we drove up the coast to central California for a few days. I’d like to say it was all in the name of family time while our oldest was on spring break, but while that was the intention, Jonathan’s work was taking him to San Luis Obispo for a few days and we were really just tagging along. But something about a long car ride together–all those minutes to let conversations go where hurried busyness and distractions at home don’t usually leave time–being transplanted to a new place, new experiences, and jarred from routine just enough to see each other in a different light. This is why we take family trips, you know?

From simple joys like riding the elevator in the hotel, its glass windows overlooking the manicured lobby, to planned excursions like State Parks and local beaches, the whole thing is adventure and making memories together.

The first morning we went to Montaña de Oro State Park to a rocky beach where a creek runs out into the ocean beside beautiful rock formations, and even a little cave. It was chilly because of the marine layer and the tide was too high to reach the cave, but the boys enjoyed tossing rocks and driftwood into the water and watching them rush down the current toward the ocean only to be pushed back by the waves. 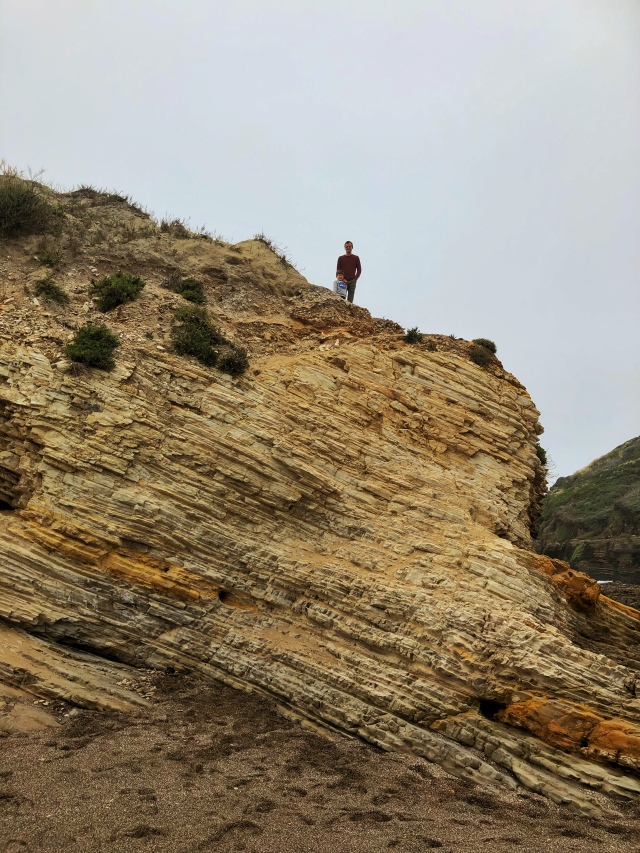 Eddie and his dad braved the steep climb up the large rock formation while Xander and I explored the tide pools at lower elevation while little Ollie slept in the carrier. Sweet, simple, free entertainment. But powerful because shared experiences build relationships.

Jonathan was busy that afternoon, and lest you think all was perfect all the time and traveling with 3 kids is just peachy keen 100% of the time, I must report there was quite the fiasco that afternoon at the hotel pool. Let’s just say our time there was cut short and we did not return. My idea of quality entertainment that evening consisted only of loading the boys up in the wagon and venturing across the street to a store to check out their limited toy merchandise (no we did not purchase anything) followed by heated up lunch leftovers in the hotel microwave. Oh, and Ollie refused to sleep that night unless he was in our bed which means my sleep was rather lacking.

But then the next day was full of glorious adventure! Well…after a rushed complimentary hotel breakfast in which a lady thought me very rude as I did my best to rush my boys’ their breakfast while they sat unattended at a table around the corner and hopefully before they managed to fight/scream/hurt one another/get into trouble with the hotel staff. All this because Jonathan had a few more meetings that morning and because I’m obviously still learning how to manage three boys all on my own. *grimace*

Oh yes, the magic. Later that morning we pulled up to a gem of a local beach town for a picture perfect beach day–warm and sunny, low tide, small waves. While I did get too much sun and was sure feeling it later, I managed to remember to sunscreen all three boys so we’ll call it a win.

They could have run and jumped and played in the water and sand all day. Ollie was immensely enjoying his nap in the carrier once again, and the Easter basket kite got its chance to fly.

But here’s what sticks out to me: yes, the Easter basket deal just added more to-do’s to a very busy weekend, but that kite added a sweet family activity to the special time we had together. Did we absolutely need it? Probably not, and it still would’ve been a good day.

But it was the icing on the cake. And by the way, not all the ingredients of a cake are sweet. You usually need a teaspoon of salt for a little depth. So those fiasco moments only added to the batter that made such a delicious cake, right?